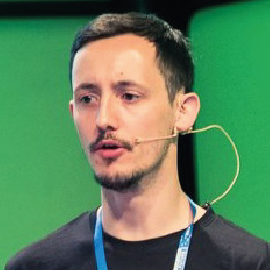 This session looks at common issues with just relying on end to end automation testing tools, using examples to demonstrate common pitfalls and how visual testing can help add another tool to your tool belt.
The talk looks at why we automate tests, the issue with just manually testing, common end to end automation pitfalls, a brief introduction to visual testing and finally a look at common issues with visual testing and ways to overcome them.
Through the use of interactive examples the audience will gain an understanding of why relying on just manual testing can become an issue and how too much automation has a negative impact by looking at testing anti-patterns. The audience will also learn what visual testing is, what tools are available, some of the common pitfalls of using visual testings as well as tips on ways to overcome them based on experience of creating a custom visual test framework at my current employer.

Viv Richards is a QA Consultant at Notbinary.
He is also an active blogger and loves to play an active role in the software development community. In his spare time he enjoys teaching children to code as a CodeClub volunteer as well as bringing communities together to share skills and knowledge by organizing local meet-up’s as well as organizing Wales largest software development conference, SwanseaCon, and co-organize a free developer conference, DDD Wales. You can follow Viv on twitter via @11vlr.
www.vivrichards.co.uk