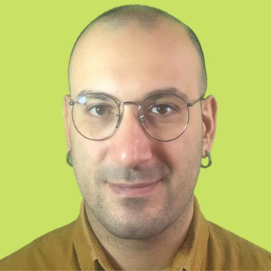 Evolution of Game from Primitive Games to Modern Games

Man was not expected to come to the earth for games to exist on earth. When you look at the other animals around you, you can see that all of them are willing to play when the necessary conditions are met.
Since we humans evolve faster than other animals, we developed the concept we call game faster.
In this speech, I will explain how the game evolved from the games that our ancestors, who built their lives in the caves, played to hunt and not be hunted, to the fast-consuming games called hyper casual today.

The first clear memories of Alper Berber start at arcade game places in the early 90s, as we know “Atari Salonu” in Turkey. Asking coins from his mother and father, using them on game machines was the core life loop of those days for him. As time passed, he turned to playing games on consoles and computers at home. And priorities have changed, like being successful in classes and settling in good schools.
After school ended, challenges turned to business tasks. He was working as a finance specialist and not as happy as he hoped from business life.

One day, he and his friends started to build an app. They asked “How can we make our users use our app more and make the users suggest the app to their friends?”. While they were searching for an answer, they encountered “gamification”. It is the time that nothing will be the same. The app didn’t work but “no failure, only experiment”.  That experience was “gamification”. They wanted to make gamification in Turkey and started BrandNewGame Turkey. They were so energetic and enthusiastic but there was a problem. A very small group of people knew what gamification was. They rolled up their sleeves and started Gamification Turkey, a non-profit organization aimed to spread the awareness of gamification in Turkey. They made the first international summits in Turkey, brought together the ones who are interested in gamification and built a hub for them.

As gamification became known, projects started to get alive. He participated in gamification projects for Koçfinans, Oyak Renault, Anadolu Hayat Emeklilik, CCI, Ford Otosan, Intertech, Borusan Holding… He was accredited by Gamification Academy and trained more than 1000 people in Turkey.

In this process, knowledge and experience accumulated enough to force his body for a book. Then he sat and wrote “Oyunlaştırma: Oynayarak Başarmak”, published by Seçkin Publishing. After the book, he started lecturing on gamification at Bilgi University, Digital Game Department.

In the summer of 2021, a game idea fell in his mind and he decided to change his career path in the game industry and started at a game studio as a game designer, and he still continues.